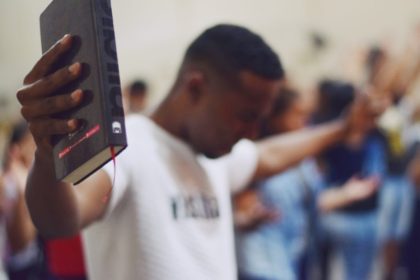 “What man among you, if he has a hundred sheep and has lost one of them, does not leave the ninety-nine in the open pasture and go after the one which is lost until he finds it? When he has found it, he lays it on his shoulders, rejoicing. And when he comes home, he calls together his friends and his neighbors, saying to them, ‘Rejoice with me, for I have found my sheep which was lost!’ I tell you that in the same way, there will be more joy in heaven over one sinner who repents than over ninety-nine righteous persons who need no repentance.”

Here’s another obvious thing about this that nonetheless we may overlook. Two things are needed before something or someone can be “lost.” First, you need the thing that gets lost, that’s obvious, but second, you need a person who loses the thing. Lostness is a relational thing. A thing can only be lost in relation to a person who loses it and misses it and wants to recover it. Lostness implies possession and value. It implies relationship. It tells us that there is a person who values the lost thing and wants to recover it. When Jesus tells us that we are lost, He’s telling us that God values us and wants a relationship with us. The value he places on us motivated Him to do something to recover us to Himself.

A sheep may stray from the flock and not be aware that it is lost. It goes it’s way happily munching whatever grass is around. It is the shepherd who feels the loss and knows that he must go rescue and restore his sheep before it becomes a meal for a wolf.

When someone is lost, we form a search party to go looking for them in hope of rescuing them and restoring them to their proper place. God tells us that we are lost. We are not in our right place in relation to Him. We are not in the relationship with Him that He created us to have. That is why He sent His Son to find us, rescue us and restore us. The mission of Jesus was a rescue mission! The trouble with too many of us is that we don’t want to be rescued. We actually hide from the Rescuer and refuse His help! We can be like a man drowning in the ocean who angrily tells the lifeguard that he is ok and doesn’t need any help. Because of our pride and self-sufficient attitude we refuse to admit that we are lost. We refuse to see our need for the Rescuer. But God tells us that we have strayed like sheep and are lost and that He has caused all of our sins and iniquities to be laid upon Christ on the cross that we might be redeemed (see Isaiah 53:6).

Another obvious thing about this is that being found and rescued is most often a passive thing. You do not “find” yourself, but you are found. If you realize you are lost and admit it, you may wander around, you may cry out, you might put out signals so that rescuers can locate you, but in most cases you need someone else to seek you out and rescue you and your role is to allow it to happen. Spiritually you allow yourself to be found by the God who is looking for you.

So to be “found” and saved by Jesus what do we do? Scripture says that we must believe in Jesus Christ, that is, we must put our faith in Him, our confidence in Him, to save us (John 3:16). Scripture says, “Whoever shall call upon the name of Lord will be saved” (Acts 2:21 & Romans 10:13). Jesus said, “I am the door; if anyone enters through Me, he will be saved, and will go in and out and find pasture” (John 10:9). Jesus said that we need to come to Him that we may have life (John 5:40 & 7:37). It’s possible that the Spirit of Jesus Christ is looking for you right now, inviting you to be “found” and to come back to the place you should be before God. Instead of rejecting His help, why not call out to Him and allow Him to reconcile you to God and restore you to the place you should be before Him?