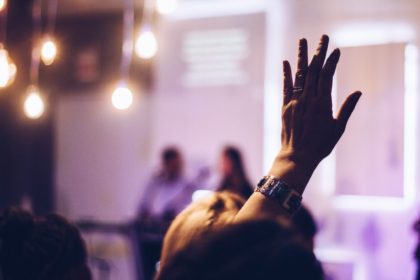 I became a Christian when I was 19. Prior to that, I was raised in the church. I have a lot of good memories going to church camp, youth groups, and vacation bible school, but I never saw my need for a Savior until my second year of college.

During the summer of 2007, God worked in my life through counseling kids at a camp. I realized how much I had to depend on Him to keep sanity and remain a positive role model for those kids. Once I went back to a Christian liberal arts university for a second year,

I raised my hands in worship for the first time and emptied myself before Jesus.

I accepted Him as my savior and was prayed for by an older college student one-on-one.

Years later in my adult life after daily trials and struggles in my faith, I came to grips with the need to begin going to church again and making the Word of God priority in my life. I had two young children (at the time, but now 3 ;)), was working full-time, and rededicated my life to Jesus during a program called ‘Time To Revive.’ Shortly after, I found a couple of churches that I had felt comfortable attending and finally settled in with a fantastic group of Believers.

I have worked in mainstream media for about 4 years; in Christian radio for about 8.

I believe that the Lord has pulled me intentionally away from the secular entertainment and media industry into one of ministry at KAMB and toward Him in all areas of life: family, career, community, and personal.